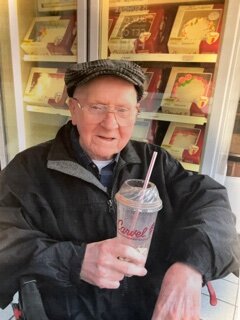 Please share a memory of Eugene to include in a keepsake book for family and friends.
View Tribute Book

After high school, he enlisted in the United States Army in 1951. He served in Korea, attaining the rank of Sergeant, and was honorably discharged in 1954.

Following his military service, Gene felt that God might be calling him to religious life, and he entered the Capuchin Friary in New Hampshire to discern his vocation. After 18 months he left the Friary and worked for New York Telephone – first as a switchman – and later as a supervisor.

In 1961 he met the love of his life - Kathleen Conroy at Breezy Point. They were married in 1962, settled in Bay Ridge and started a family.  In 1974 they bought their home in Baldwin.

Gene retired from New York Telephone in 1988. He and Kathleen were married for 43 years until her passing in 2006.

Gene spent his final years enjoying family, his children, grandchildren, and his many friends,. An avid fan of the New York Giants & Mets, Gene also enjoyed golf and played weekly with his buddies. He also volunteered in a host of Church-related ministries, including bringing communion to the home-bound, driving the elderly to and from Mass, and as a spiritual companion to the sick.

Gene was a gentle, compassionate man of great faith, he attended Mass every morning and loved to laugh.

He will be deeply missed – and has left us a legacy of love that we will always treasure.

In lieu of flowers, donations in his honor can be made to Catholic Relief Services - https://support.crs.org/donate/help-where-its-needed-most?ms=agigoo0923evg00gen00&gclid=EAIaIQobChMI5_alnNa4_AIVC73ICh2eQQmTEAAYASABEgKzWfD_BwE

Share Your Memory of
Eugene
Upload Your Memory View All Memories
Be the first to upload a memory!
Share A Memory