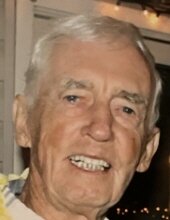 Please share a memory of William to include in a keepsake book for family and friends.
View Tribute Book

William Charles Dacier, 91, of Norfolk, Virginia and formerly of Huntington, New York, passed away in his home on September 28, 2022. William (Bill) was born in Brooklyn, New York on Flag Day, June 14, 1931 to Armand and Louise Dacier. He enlisted in the Air Force and served in Korea working with radar systems. After being honorably discharged, he was educated at Brooklyn Polytechnic and earned a Master of Science in Electrical Engineering at New York University. While in college, he met his future wife, Marion Davis. They made their home in Huntington, New York. His career spanned over 40 years with Grumman Aerospace in Bethpage, New York. His proudest career moment was being part of the Apollo Space Program.

Bill proudly served his community as a Scoutmaster for the Boy Scout Troop 188, an altar server at St. Hugh’s Catholic Church, a volunteer tax preparer for AARP, and as a community gardener who donated vegetables to the food pantry at St. Hugh’s. Bill loved coffee with the New York Times, attending The Metropolitan Opera, cooking gourmet meals and reading a good book. His favorite day would include a late afternoon visit to the beach with his wife where they enjoyed a picnic dinner and a bottle of wine.

In 2018 Bill moved from Huntington to Harbor’s Edge Retirement Community in Norfolk, VA. He enjoyed being part of the Harbor’s Edge community where he had frequent visits with his sister Mary Lou and was known for his bingo and trivia game prowess.

Bill was predeceased by his wife of 55 years, Marion, his three sons William, Stephen and Kevin, and his brother, Joseph. He is survived by his sister, Mary Lou McPhaul, his sister-in-law Sr. Jean Davis, O’ Carm, his sister-in-law Regina Dacier, his son Brian (Nancy), daughter Christine (Sue) and grandchildren Jacob, Kane, Cole, Janey and Maggie. Bill loved his grandchildren tremendously and will always be their beloved Poppaloppa.

A funeral mass will be held at Sacred Heart Catholic Church in Norfolk, Virginia, on October 8,2022 at 10:00 AM. A memorial mass will be held at St. Hugh of Lincoln Catholic Church in Huntington, New York, on October 22,2022 at 9:30 AM with burial immediately following at St. Patrick’s Cemetery in Cold Spring Harbor, New York. Donations can be made to the Food Pantry at St. Hugh of Lincoln Church. The family is grateful for the Harbor’s Edge staff as well as the loving care provided by Katharine Coles and Janice Losbanos.