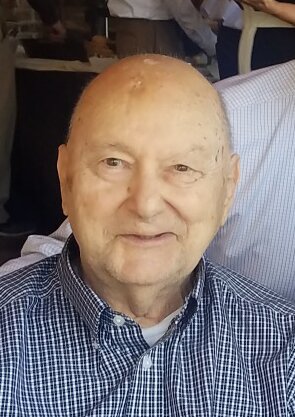 Please share a memory of Nicholas to include in a keepsake book for family and friends.
View Tribute Book

Nicholas Christus Stratakis passed away peacefully in his sleep on Saturday morning, June 11,2022.  He was 92 years old.  He is survived by his daughter Katherine and son-in-law James Boden, of Greenlawn, NY; his son-in-law Michael Shubsda of Liverpool, NY and his two grandchildren, Danielle, of Manhattan, NY and Alex, of Liverpool, NY; his brother Peter Stratakis, of Basking Ridge, NJ; and his sister Anne Beratis of Spring Hill, FL.  He was predeceased by his daughter Elizabeth Ann Shubsda in 2017.

Nick was born in Brooklyn, NY in 1930 to parents Christus and Katherine Stratakis, both Greek immigrants.  He attended Manual Training High School in Brooklyn where he lettered in Gymnastics. He received his diploma in Aircraft Maintenance from the Academy of Aeronautics in Flushing, NY in 1950.  He received a Bachelor of Arts in Economics in 1963 from Brooklyn College and graduated with a master’s in Industrial Management from Brooklyn Polytechnic University in 1970 while working at Grumman Aerospace Corporation.

He married Helen Gitsas of Northport, NY in April of 1964 and moved to Huntington, NY.  There they had two children, Katherine Lee in 1967 and Elizabeth Ann in 1972.

Nick had a successful thirty-year career at Grumman Aerospace Corporation in Bethpage on Long Island.  He worked his way up to group leader involved with various designs and protocols for the F-14 Fighter Jet and the E2C ‘Hawkeye’ Airborne Command and Control Aircraft.  He retired in 1992.

He was active in the Greek church, St. Paraskevi, in Greenlawn, NY in the early years.  He enjoyed boating, fishing, golf and traveling throughout his life.  He was really excited when he was able to be a Marshall at the 1995 US Open in Shinnecock on LI.

Nick was an independent soul who cherished close friendships and more thoughtful activities, like doing the Sunday Crossword (in Newsday) with his sister Anne. He loved to listen to music, often tapping his feet along to the beat.

Nick had a kind heart, quick wit, an inviting happy smile and a very firm handshake.  His ‘signature’ wry smile and wave hello will never be forgotten.  May he rest in peace.

Share Your Memory of
Nicholas
Upload Your Memory View All Memories
Be the first to upload a memory!
Share A Memory