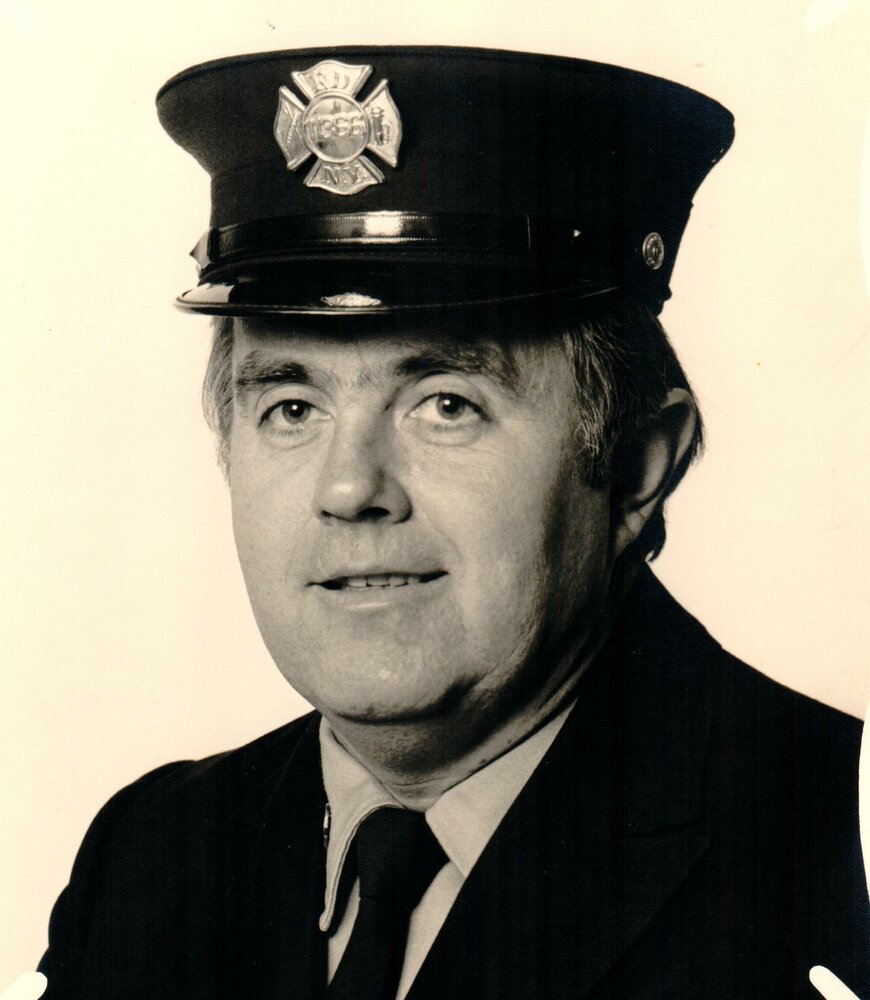 Please share a memory of Thomas to include in a keepsake book for family and friends.
View Tribute Book

Thomas Patrick Collins II was called home to God on Monday, October 10, 2022, at the age of 83.
He will be deeply missed by family and friends for his quick wit, strong work ethic, fierce loyalty, and strong Catholic faith.
Thomas was born in 1939 in Huntington, New York, to the late Ita Pauline (McNamarra) and Thomas Patrick Collins.
He was a graduate of Huntington High School, and was well known as a hard working, determined, respected, and some might even say stubborn, individual.
He enlisted in the US Coast Guard after high school, where he served honorably for 4 years, before returning home to Huntington, and became an electrician’s apprentice.
While honing his electrician’s skills, he decided to expand his horizons, and take the NYC Fire Department exam.  Despite his struggles with dyslexia, he was able to pass, and became a proud member of the FDNY, serving the city of New York for over 25 years.
He began his honorable career assigned to 14 Truck / 35 Engine, the “Heaven in Harlem” station house, and he later moved to where he spent the majority of his time with the FDNY on 127 Truck / 273 Engine in Queens, affectionately known as “The Mickey Mouse House.”
He served in Harlem through the riots of the 1960’s, and later received a Medal of Honor award from Mayor Edward Koch for saving a woman from a burning building in Queens.
While working as an FDNY firefighter, Tom also established his own electrical business, which he successfully ran for approximately 60  years.
Tom proudly served as a Fire Commissioner for the town of Huntington for over 20 years.
He was a devout Catholic, and life long communicant of St. Patrick’s Roman Catholic Church in Huntington, as well as a long time member of the St. Agnes Roman Catholic Church, Greenport, NY.
Tom is predeceased by his parents Thomas Patrick Collins, Huntington, NY, and Ita Pauline Collins, County Clare, Ireland.
Tom is survived by his loving wife of 56 years, Nancy Ann (Foster) Collins, who he wed in 1965.
He is also survived by his sister Norrie Ann Salmons, and her husband James, of Lewes, Delaware.
Tom and Nancy have four loving children; Kathleen Screen (Martin) of Little Silver, NJ; Thomas Collins III (Kelly) of Centerport, NY; Christopher Collins (Jodi) of Merrick, NY; and Stephanie Ziegler (William) of Huntington, NY.  They are proud grandparents to Meagan & Kevin Screen, Emily, Caitlin, Keira, & Aileen Collins, Meredith & Avery Collins, and Nancy Ziegler.
He is also survived by nieces Jennifer Martin (James) and their son James, Shirean Dryden (Michael) and their daughter Reid, his sister-in law, Ruthie Foster of Danvers, Massachusetts, his nieces Julie Foster and Jody Martin, his nephew,  Joel Foster and many cousins in the USA and Ireland.
Tom touched many lives, from the NYPD, his customers, his tenants, the Huntington Fire Department community, and his neighbors in Huntington and Greenport.
He enjoyed good conversation, stories, discussions, and was never shy about sharing his thoughts and opinions on the subject at hand.
Tom was an avid landscaper, and took great care of his lawns and yard work personally, because in his mind, why should he pay someone to do something they could never do as well as he could himself.
A visitation will be held on Sunday, October 16 & Monday, October 17, 2022, from 2-4 and 7-9pm, at the M.A. Connell Funeral Home, 934 New York Ave, Huntington, NY (https://maconnellfuneralhome.com).
A mass of Christian Burial will be held on Tuesday, October 18, 2022, at 9:45am at St. Patrick’s Roman Catholic Church, 400 Main St, Huntington, NY.
In lieu of flowers, donations can be made to the Tunnel to Towers Foundation, in the name of Thomas P. Collins.  https://dogood.t2t.org/give/320847/#!/donation/checkout, and check the DEDICATE MY DONATION IN HONOR OR MEMORY OF SOMEONE box.

Share Your Memory of
Thomas
Upload Your Memory View All Memories
Be the first to upload a memory!
Share A Memory